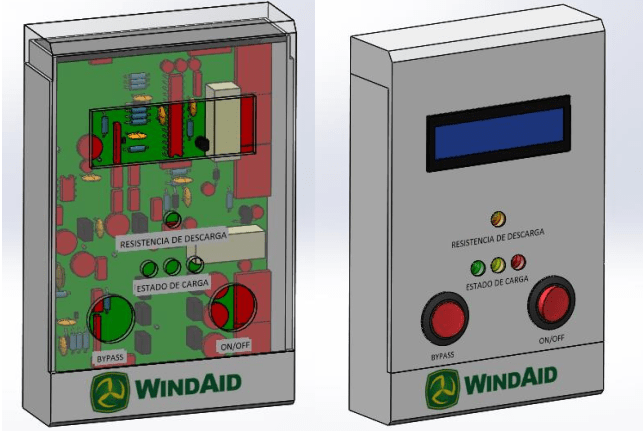 This post was originally published on the WindAid blog. The article can be found here

Back in the summer of 2014, I had one of the best experiences of my life (sounds cheesy and the start of a teenage girl movie doesn’t it?). I was just finishing university and graduating with an electronics engineering bachelor degree at the University of Plymouth and before getting hooked into a 9-5 job I was looking to have an experience where I could combine three different factors:

After a long web search, I applied to and contacted different organizations and companies. After a few months, I had the opportunity of either going to Peru with WindAid or Rwanda with Practical Action. To be honest I got scared with the Rwanda opportunity as I had to travel the country on my own going from village to village assessing them energetically. The work was very interested but I got scared given its recent history :), therefore, I decided to go to Peru. Best decision ever!

With that said, one of the best things I did at WindAid was to use my skills as an electronics engineer to create a device that could actually make a difference. After analyzing the electronic devices WindAid uses for its electricity generation system (battery charge controller and inverter), it was obvious that they could benefit from having their own devices custom made and locally built, after talking to the WindAid Team and understanding what they were looking for I decided to take on  the design of the first WindAid battery charge controller; let me tell you how did I arrive to that conclusion:

The team was excited to have me undertake the project since that meant it would be highly beneficial for the organization to have its own controller. After the initial R&D costs, the controller production cost would be half the price compared to the current one. Also, by having the knowledge of the insides of the controller it would make it enormously easier to repair in case of malfunction.

What’s the battery charge controller for?

The main purpose of the battery charge controller is to monitor the voltage levels of the battery and make sure they are not too high or too low, and in case they are, take actions such as disconnecting the turbine from the battery.

The proposed design for the controller was the following depicted in the block diagram below:

Experimental use as it has the possibility of increasing the efficiency of the energy extraction process as described “Analysis of wind power for battery charging” by E. Mulijadi.

This element converts (rectifies) the sinusoidal voltage from the wind turbine generator into a DC voltage in order to charge and work with the 12V battery.

Measure the battery voltage to determine under and overvoltage conditions. It is also used in the MPPT algorithm calculations

Measure the output current of the generator that goes into the battery. It is used to determine if the charge must be stopped in case of overcurrent and for the MPPT algorithm calculations.

A DC/DC converter of SEPIC topology was used to implement the MPPT optimization. The DC/DC converter acts as an element that changes the impedance seen by the source from the load, therefore has the ability to change the rotation speed of the generator thus allowing it to reach the maximum power point.

The device needs an MCU to perform all the MPPT algorithm calculations, sense and calculate the battery voltage and current, drive the DC/DC converter control signal and open/close the protection relays.

An LCD screen was added to display useful information such as voltage, current, power and battery level.

From the block diagram, commercial components and detailed design were done producing the schematics: 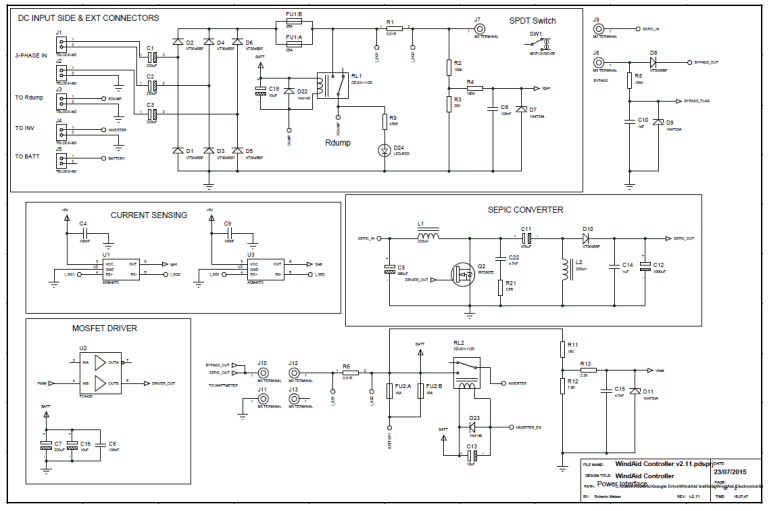 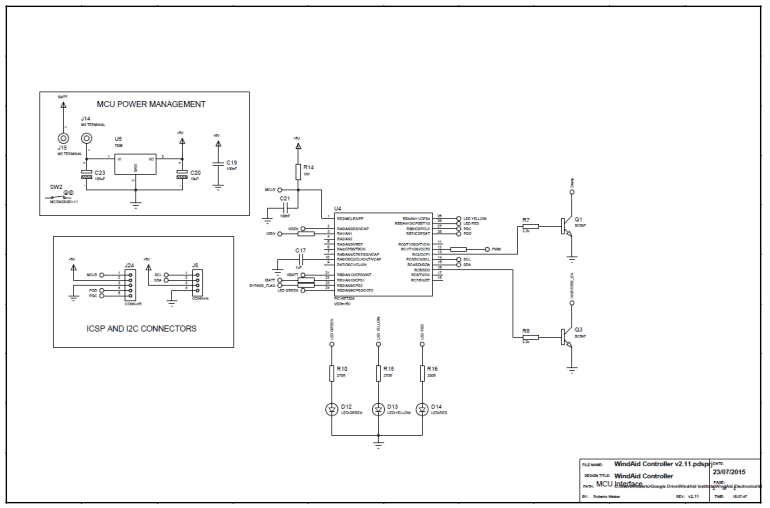 After finishing the circuit diagram and schematics a PCB was designed taking into account the following considerations: 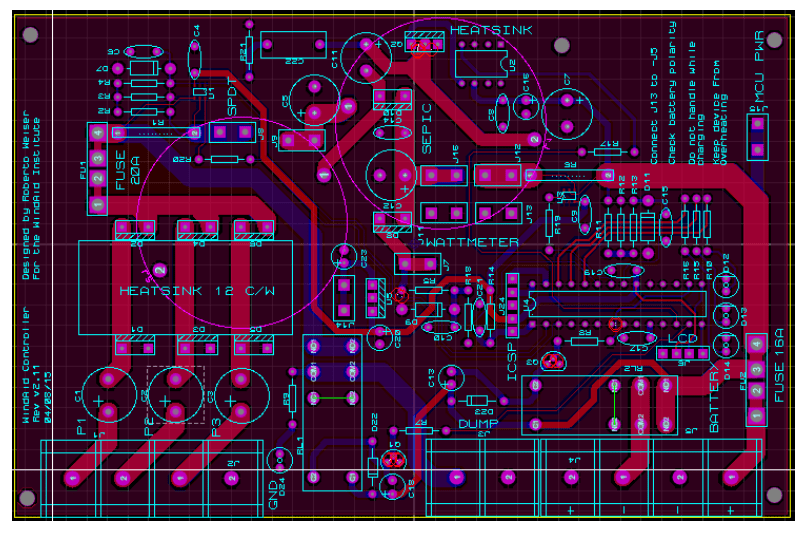 The MCU was programmed with a custom made code written in C following a finite state machine topology: 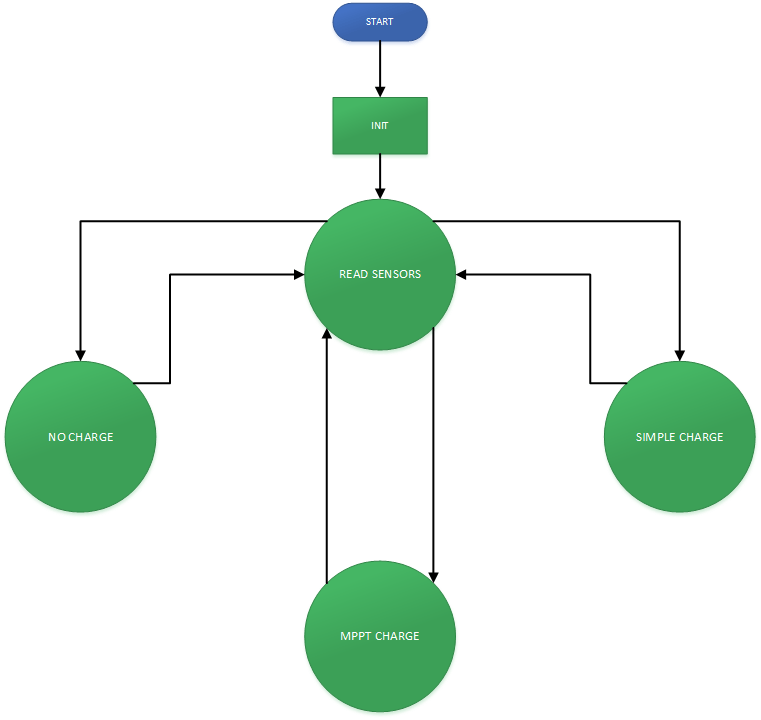 Unfortunately, there was no enclosure made for the controller and it was delivered as in the following picture: 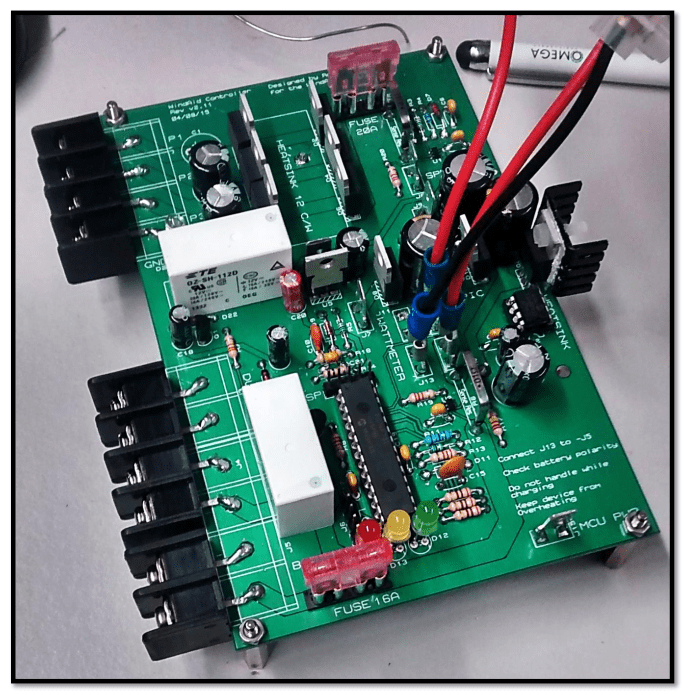 If you are an enclosure designer or you just like to make boxes we need your help!

The controller will be in a harsh environment so it needs a good enclosure that can withstand sand, dust, moisture and also dissipate heat or ventilate. Ideally will be made of steel as it can be easily found in the region (lots of mines around) and can be reused with other controllers. The initial enclosure concept was the following:

Current state and what’s next

After assembling the whole device, initial testing was made to validate its core functions with satisfactory results. These initial test consisted in measuring the accuracy of sensors, opening/closing of relays and correct functioning of the DC/DC converter.

The project is currently still in development and being tested with real turbines. Also, a modular version was designed in order to increase its repairability and ease of teaching for the volunteers and local communities.

The next step is to do a vast amount of testing with real systems to validate the functionality of the controller. Particularly the MPPT feature.

After finishing with testing and validation, the boards can be mass produced and distributed around the communities. Because this is not a commercial product and it is not next to communication infrastructure, EMC compliance will not be necessary (yet).

Optimize the Energy Consumption of your Electronic Device