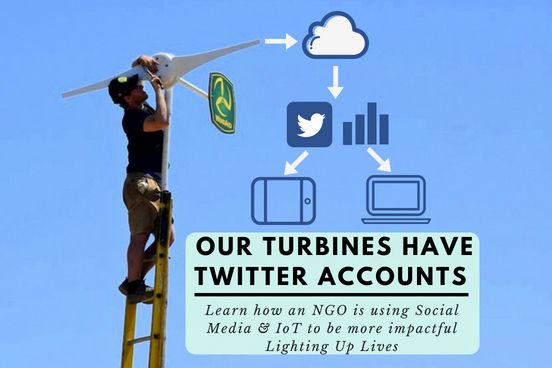 Wind Turbines with Twitter accounts? Unconventional perhaps, but it’s a zero service cost option I was able to implement that allows WindAid Institute, a Peruvian Non Governmental Organisation (NGO) to receive notifications from their wind turbine systems in rural Peru. The open source remote monitor project (or ReMona) was born out of a need to: 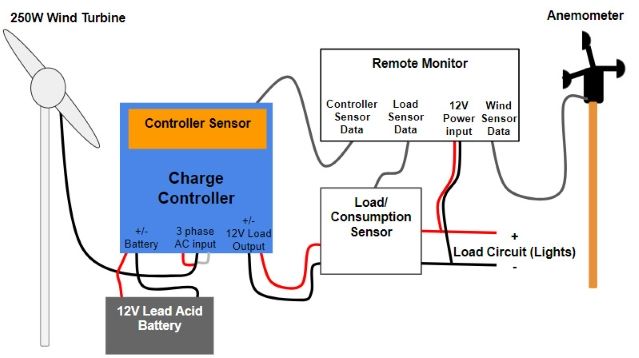 Block diagram explaining where ReMona connects to the WindAid system.

[Quick explanation – AC electricity is generated from the turbine, and enters the system via ‘3 phase AC input’. The Charge Controller, converts this AC, into DC electricity which allows the energy to store in the 12V lead acid battery, and/or supply the 12V load circuit. The Remote Monitor observes the generation of turbine and the consumption of the loads (including itself). It also takes in wind speed data via the anemometer] 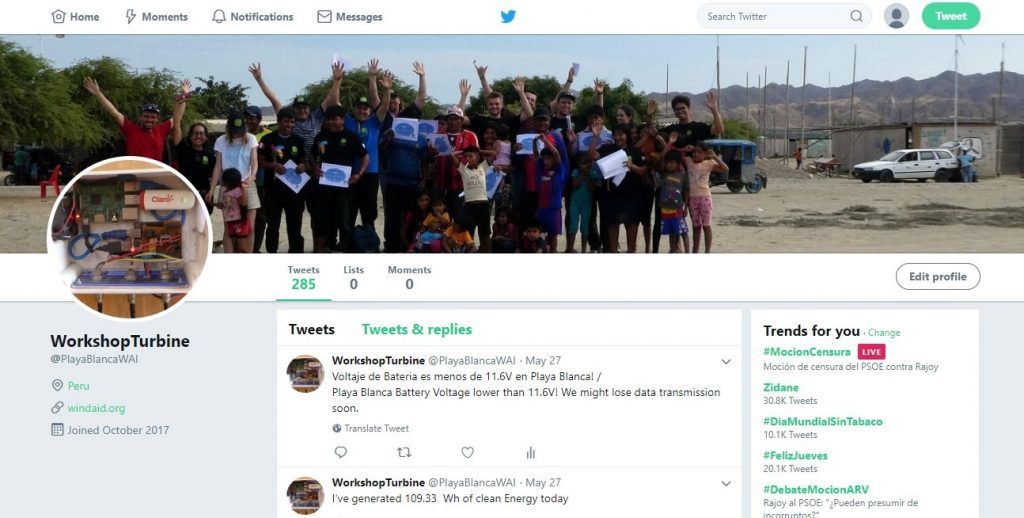 Alerts are triggered when certain conditions are met, e.g. a battery level less than 11.6 Volts (V), and a message or ‘Tweet’ is sent to the linked Twitter account which can be followed by staff (or anyone by adding the twitter handle) so investigations can be started. The first step is to view the most recent data to try and identify possible problems. Staff members can use an Internet of Things (IoT) platform to observe near live data and carry out investigations from the workshop rather than have to travel 14 hours to visit the turbine. Click the screenshot for an example site. 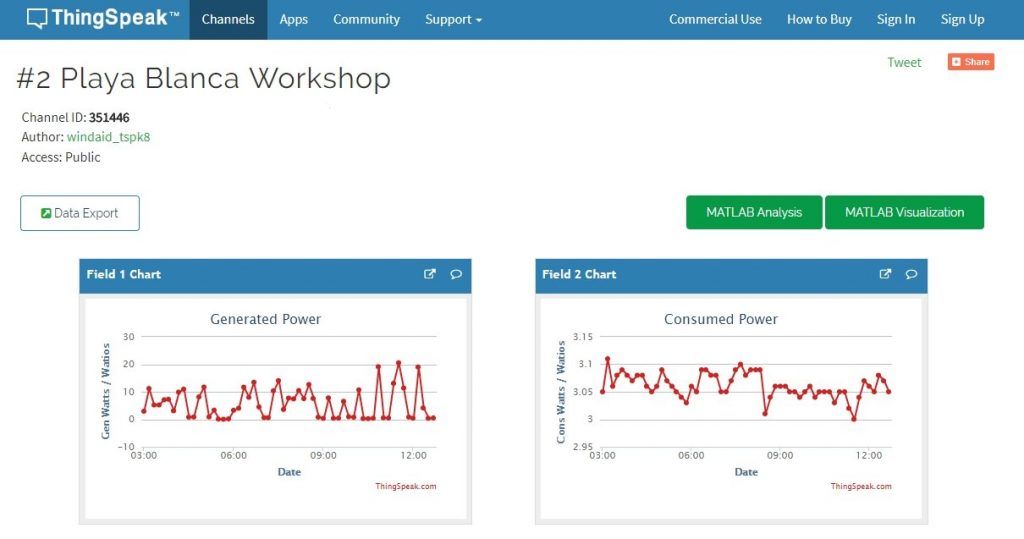 There have been some unexpected outcomes of the project that the NGO has also benefited from.

Amongst other projects, developing and building a working prototype of a Remote Monitor for WindAid institute has been a huge part of my life over the last 18 months. After a successful application to Engineers without Borders UK, I flew to Peru in September of 2016 as part of a 6 month international volunteer placement to support WindAid in their aspirations to have such a system for their 1.7m 250 Watt (W) wind turbine. In March of 2017 I was asked to become part of the full time team and continue with Research and Design projects, along with other non-engineering activities such as fundraising, online content creation, recruitment for their volunteer program and community coordination. 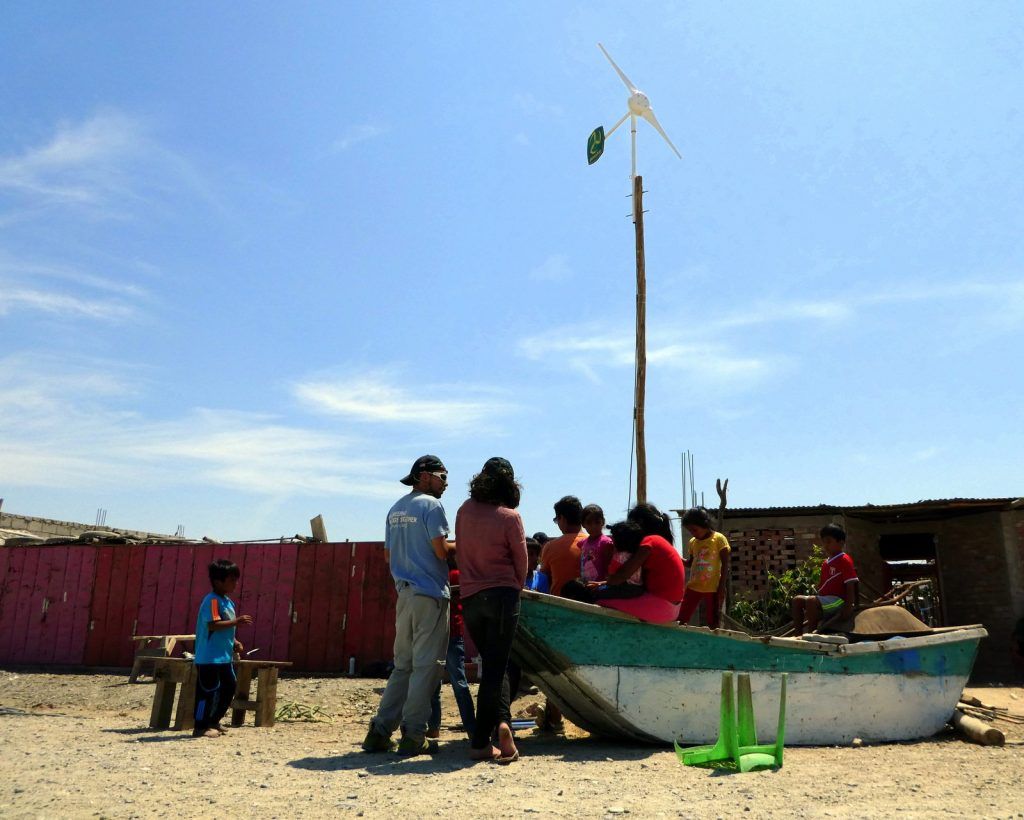 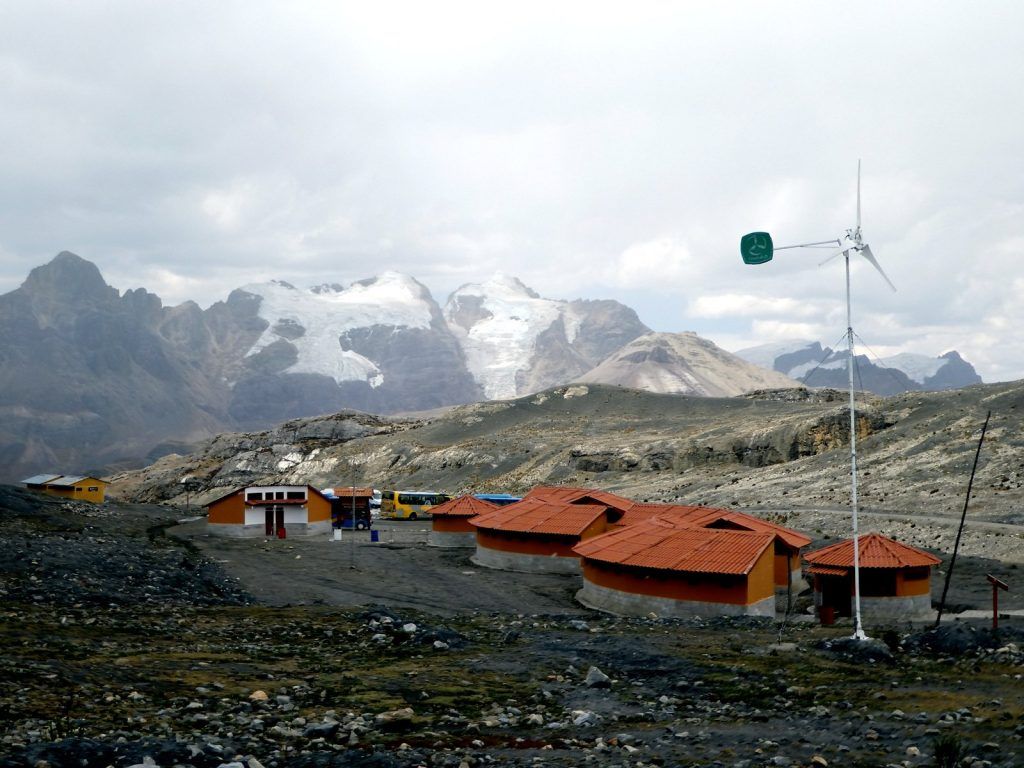 WindAid Institute to date has deployed more than 50 wind turbines, impacting the lives of more than 700 Peruvians who do not have access to the national electricity grid. Volunteers come from all corners of the globe to learn how to build small-scale wind turbines from scratch and participate in the #lightupalife social programme, deploying these wind turbines in rural communities over a 4 week project.

There are a plethora of hardware options to choose from for building such a project. In truth by the time I had my first working prototype, newer potentially cheaper options were available, but it would be very difficult sourcing them in Peru. Two examples would be the Particle Electron, or PyCom’s Gpy that may have better energy performance, with built in SIM card capabilities to send the sensor data. After conducting a review of our options, I selected the Arduino Uno and Raspberry Pi combination because of their availability within Peru. If a module were to break I’ve identified suppliers in Trujillo, the city WindAid institute is based in. A lesson I learnt very quickly was if building something in an international development context the local availability of parts is key, as services such as Amazon or eBay may simply just not operate in the country you are working in.

The IoT and ‘maker’ space has lots of options when looking to create a monitoring project such as a weather station, websites such as instructables.com and hackster.io offer example projects but most of these assume two things we take for granted in most modern cities;

In most communities WindAid is providing electricity for the first time, so the only power source for a potential remote monitor is our very own turbine (or a separate solar PV system), and there is definitely no wifi available, although most communities have 3G or 4G mobile data coverage.

To solve the electrical supply problem, I used a module that’s widely available in any market in Peru, a car cigarette lighter. These are designed to run off your car battery and accept 12V Direct Current (DC) and output 5V DC, via a USB connection. 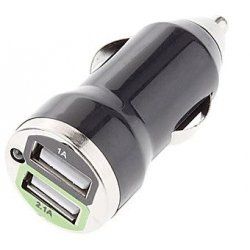 As the Raspberry Pi uses the same supply as a mobile phone (5V, 1 Amp(A), although 2A is recommended, micro USB connector) these were the perfect solution to give us an appropriate supply for the Remote Monitor.

The connectivity problem was resolved by using a USB dongle with a local SIM card. Although these devices are not ‘plug & play’ like most USB peripherals (e.g keyboard/mouse) for the Raspberry Pi, they allowed me to have a web connected Raspberry Pi, wherever there is mobile data coverage.

Here’s a breakdown of each of the modules and steps involved in the ReMona project. Firstly data is collected and then transmitted from the field to an online platform that can be viewed anywhere with an internet connection. 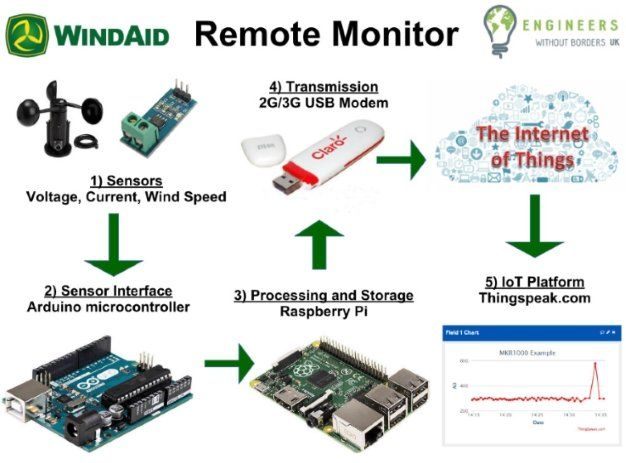 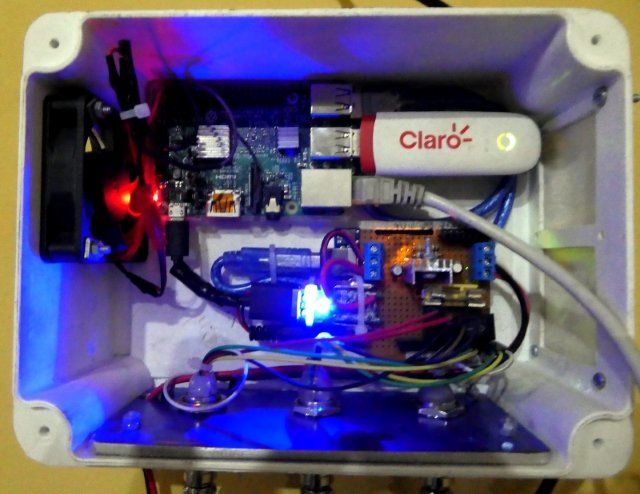 Here’s a breakdown of hardware costs, note in Peru the prices are slightly elevated due to importation costs. To give a budget price, the sensor pack costs $63, the ReMona Unit cost is $150, and monthly data plans cost between $6 to $9 depending on the mobile phone network.

In communities with more than one wind turbine, we need only install 2 or 3 anemometers to measure the wind. For example in one of our largest communities, Playa Blanca we have 23 turbines at the time of writing, we’ve cut costs down dramatically without every ReMona needing and anemometer. 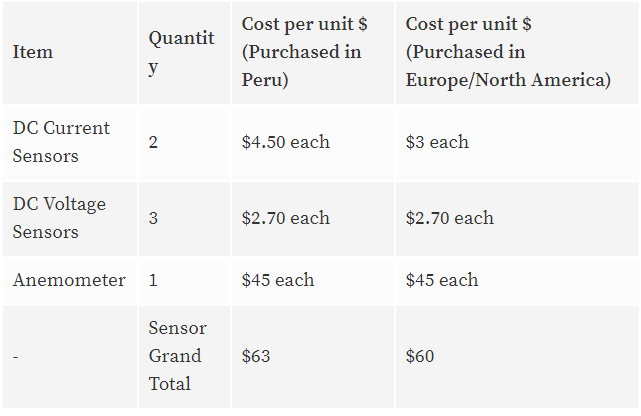 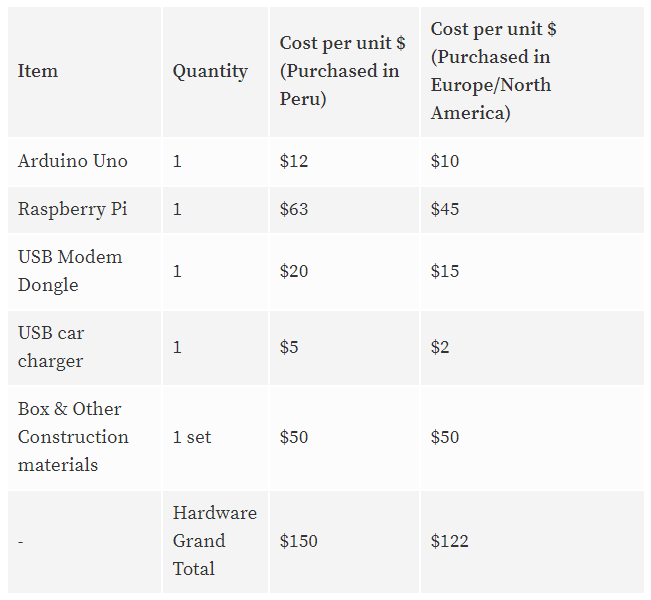 Monthly data packages vary widely in Peru, and I needed to carry out tests in each new community to see which service provider had the strongest data signal. Arguably smaller data packages could be used, but these were the minimums we could arrange with the networks. My advice for anyone looking to implement something similar is to speak to local people and ask which mobile service are the strongest, then go and visit each network provider and find out their lowest monthly package, and finally use a pay as you go sim to check data coverage in the installation site.

Hologram.io – trials worked out to be more expensive than a Peru SIM card, this is likely to do with the method of sending the data in Node-RED to Thingspeak.com

Particle.io – no trials carried out, also offer hardware solutions that could be an alternative to my Uno and Pi combination.

In our case with the Claro network we could get 500MB for $9 a month, or with the Bitel network 1GB for $6 a month. It would depend on community coverage on which we implemented.

I’ve written a build guide, and other project documentation so WindAid are able to produce more of my Remote Monitors. These guides will be open source and available for anyone to build, modify and change for other projects. If you know of any organisation that is looking to implement such technology please share this article, and feel free to get in touch with me with any questions, and I’ll do my best to help with your project, get in touch via linkedIn.

WindAid Institute runs 10 programmes a year, where anyone with or without engineering experience can come and be fully immersed in hand building wind turbines from scratch, from resin injecting blades, to winding copper coils and creating permanent magnet rotors. So if you’re interested in getting hands-on experience on your CV, or you’re taking a sabbatical and looking to put your skill set to an impactful social programme, read more about WindAid’s Light Up a Life programme here.

A special thanks to all the WindAid team, Darren Wallace of CDSM for helping me develop the prototype from the UK, & Engineers without Borders UK and their international volunteer programme that started the whole project and experience. 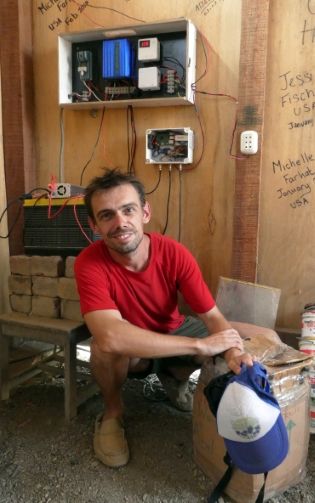 The author in the community workshop of Playa Blanca, with his ReMona unit in the background. Feel free to visit his linkedIn profile and get in touch.

Electrical engineer and project manager working in renewables industry after volunteering and working in Peru for the NGO WindAid Institute. If you found my articles useful get in touch, I'd love to hear if you've found them useful!

When you start a new journey, don’t forget your Block Diagram!