One of the main challenges that HW startups face is the issue of financing the project. Fortunately, in the last years, a range of different alternatives has risen allowing many companies to take that initial jump and pay for development and manufacturing costs. One of the most popular ways to finance a project nowadays without involving banks and investors is through crowdfunding. What the backers get in return can either be a percentage of ownership of the company or a special edition product (sometimes even both).

In this article, we will interview one of Developpa’s members that have successfully launched a product through the Kickstarter platform.

Mario studied math and computer science but worked as a hardware engineer through most of his career. While bored at his last web development job, he built and launched a music synthesizer called Gecho Loopsynth. This little clever and charming piece of hardware lets you capture sounds from the environment and whatever the microphone picks and plays it back with added effects and in a loop sequence. 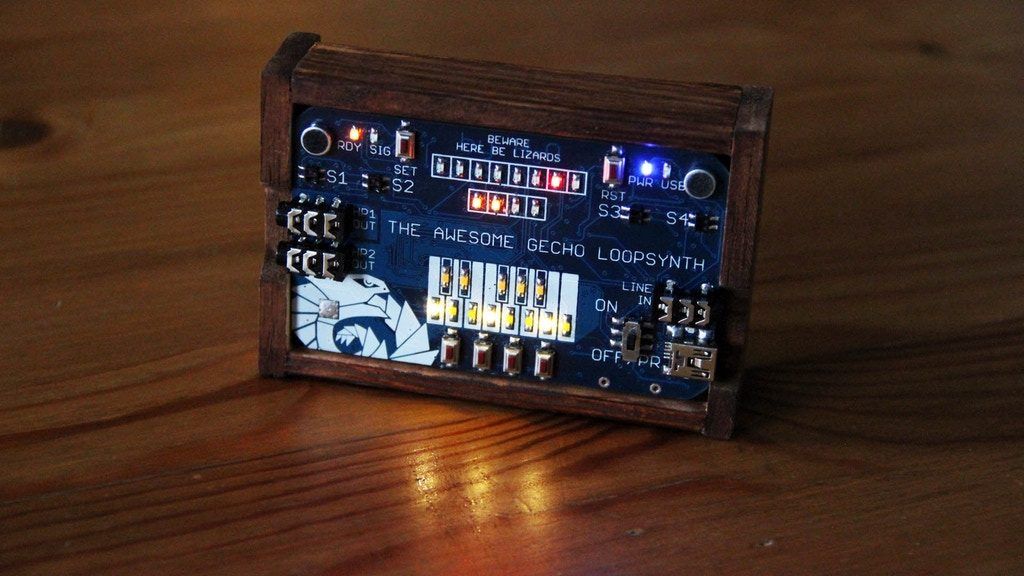 Where did this idea come from?

From an existing project – Noah Vawter’s Ambient Addition – and it’s no secret, I mentioned it in Kickstarter campaign. I believe that at the time when he developed the prototype using Analog Devices’ Sharc DSP processor, it wasn’t commercially viable thanks to the price of the components. But the demo was fascinating. I could not replicate the exact effect, but I think it came quite close. Listening to lawn movers via Gecho was quite an interesting experience, a hoover was too loud for it though. Works better when turned towards a bunch of howling people 🙂

Developpa practical takeout: you don’t need to reinvent the wheel or create something that doesn’t exist. Most good ideas are refinements and perfections of previous ones

Did you develop the product yourself with partners (friends?) or hired external engineers?

I developed it myself. Started coding during breaks at work, hiding at the nearby coffee shop, working on STM32F4 Discovery board with a prototype “shield” with microphones, pre-amps, buttons, IR sensors and LEDs. Later I designed the first custom board, and after 3 more iterations, it was ready for production.

Developpa practical takeout: use a development board for proof of concept and quick prototyping. Caffeine helps you focus. 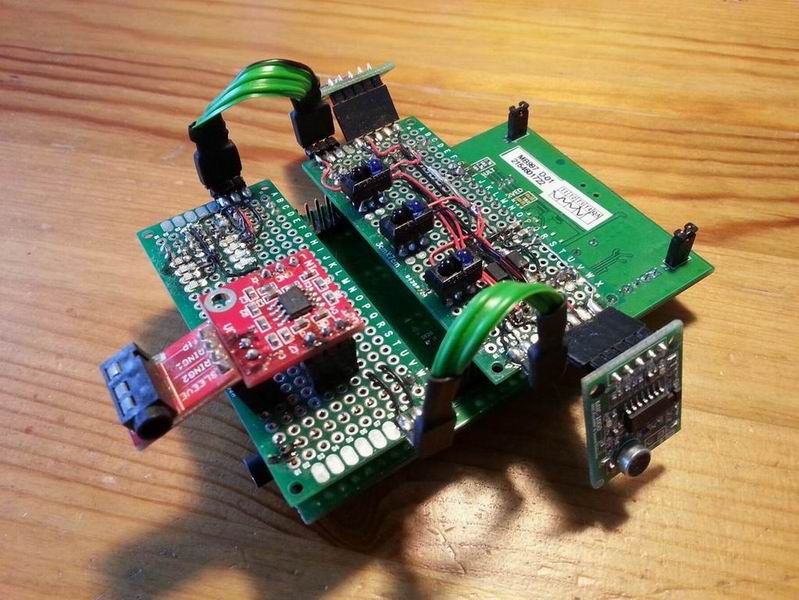 Did you have a full working prototype before starting the Kickstarter campaign?

Yes, it was a 2nd revision of the custom board and it got updated again during the campaign based on suggestions from backers. It was very cool to have this amount of early feedback, and also very motivating. What I didn’t have was the final enclosure or even a quote from the manufacturer – but I was talking to a few. It got arranged successfully during the campaign – a lovely wooden box tweaked to match the latest design. What was delivered to backers looked (and worked) even better than originally advertised. Also, some accessories were added later on: protective acrylic plates (which were offered for free as a compensation for 1-2 months delay in production), and a black “velvet” carry pouch with the company logo.

Developpa practical takeout: reach the campaign with a working prototype and then improve it using backer’s suggestions

Did you get feedback to improve your product from your pledgers?

Sure, people started asking tons of questions from day one. The major improvement was to add MIDI (or at least footprint for the required elements) which I originally wasn’t sure about how useful or important it is to have. The MCU supported it on hardware level but having an interface like that implies also functionality on the software level, and that is a lot of work. It ended up being a DIY add-on, which wasn’t the best idea… Next version will have it soldered straight out from the factory. Even if it makes every board cost a little bit more, and not everyone will use it, it just makes sense because it removes all the overhead later – things like keeping track of who wanted what, packing additional elements… Once people got it into their hands, a lot more ideas came in. Thanks to the firmware updates over the internet, those could be delivered easily. To my surprise, the instrument eventually ended up being used by professional musicians too (i.e. people who earn their living making music), and they submitted their ideas again that got incorporated into the firmware and accompanying app too.

Developpa practical takeout: make your product flexible enough so it can then adapt to the customer’s needs. This can be done by leaving some extra space in the PCB, leaving spare pins on connectors and making the firmware updatable. 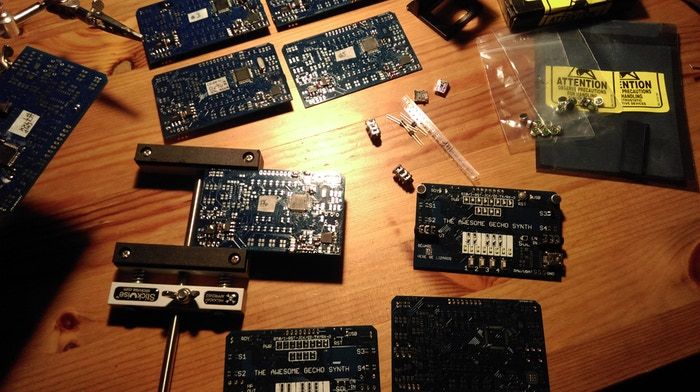 Who was your target audience?

I thought about two profiles of a user when setting up the campaign: DIY enthusiasts, who want to solder it, program and hack, and people who are interested in getting a meditative, interactive “magic music box” as a complete unit. I doubted that any of those two groups alone will be able to fully fund the project, but believed that in combination it might work. I didn’t do any advertising up front, and it didn’t occur to me to at least try to arrange media coverage, but it happened naturally. The project gained the attention of Synth DIY FB group, Rounik Sethi from ask.audio, and also hackaday.com wrote about it – I saw they mentioned a similar project that launched in the same month, so I sent them an email asking if they would like to do the same for my one. However, it attracted very little interest there, pretty much a single comment asking “what’s the hack?” 😀 That was quite surprising, as the whole project was quite “hacked together” (just check out the video ads) and also the board is designed with hackability in mind, it’s open source, blueprints are published… I believe some people still followed it and pledged.

Any “hidden” requirements from Kickstarter to publish your product or all quite straightforward?

No, KS did not interfere at all, they pretty much approved the project in an afternoon.

Developpa practical takeout: hassle free crowdfunding? Seems that Kickstarter is the place to go, however, other sites such as Indiegogo are also known for a less strict application process.

What was the hardest moment of your campaign and how did you overcome it?

Well, apart from fulfilment (packing is hell, you wouldn’t believe!) the hardest was probably the constant urge to stop taking new pledges. I was considering placing limits on all tiers because if something goes wrong in production, the more backers you have, the more work is there to fix every single board. But thankfully nobody (including me) messed up anything and all went well. Guys in the factory even took a long video from the production, which I later edited by running the noise from the assembly machines through Gecho to the tune of “GITS: Making of Cyborg”, creating a “soundtrack” for the video, it turned out really cool.

Developpa practical takeout: do not underestimate packaging. Talk with your PCB supplier or a third-party company if you want to externalize this job

How did it feel to achieve your financial goals?

It was great and scary at the same time. The production could move on but that’s where the thrilling part starts. Later it turned out that the raised amount was not nearly enough for all that was required to pay for, I ended up using a substantial portion of my personal savings to make the project go through. Since more boards were produced to cater for less than 100% yield and also to get lower cost per board, those were sold after the campaign and the project eventually broke even. By the way, the yield ended up being 99.9%, which is pretty good I think. Boards (and wooden boxes too) were manufactured in EU, it is not a lot more expensive than China, and the quality is excellent (let alone the communication).

Developpa practical takeout: manufacturing costs are always higher than predicted. Give yourself some headroom and create a buffer for these situations.

What are your top recommendations for HW entrepreneurs that want to post their products on Kickstarter?

Make sure your prototype works and can do what is advertised. Those “small things to be ironed out later” often turn out to be major showstoppers.

Get rigid quotes from all involved 3rd parties up front, add contingency to cover unforeseen expenses (there will be some).

Do not add silly little distracting perks, things like t-shirts or mugs with company logo, just to have a cheaper option to support your project. People either want your product or they don’t. You shouldn’t make it harder for those who want it, to get to it – scrolling down through tons of irrelevant stuff is annoying. Also, it will be distracting you from fulfilling your campaign, you will need to create more surveys, collect addresses, arrange manufacturing and ship those items… that’s the time you are wasting not making your product better.

Do add the “1 dollar” (or euro, or pound, …) perk for those who just want to stay in touch, not everybody knows that they can pledge one unit of currency regardless whether that tier exists or not (or any amount actually).

When it comes to stretch goals, be very careful. Keep in mind that every error in your calculations is multiplied by each additional backer, and more money you raise might actually mean that you will be more at loss at the end. The last thing you want is to ask people to pay to cover these unforeseen costs, it’s the best way to make yourself appear unprofessional and lose their trust.

Add stickers (with the company logo or whatnot). People have kids and they love to get presents too. It will distract them for a while, let mom or dad focus on unboxing their reward.

PS: Most of these viewpoints come not only from my experience as a project creator but even more so from supporting 175+ projects, almost solely in the “technology” category which is notorious for overpromising and underdelivering 🙂 My overall experience is very good though.

In this article, we have had an incredible deep look into the mind of someone that has actually built something on his own, successfully crowdfunded it and deliver to his backers. It is the spirit of this article to provide practical information to anyone aspiring to crowdfund an electronic product through the details explained by Mario and the Developpa takeouts. If you have any further questions please do not hesitate to ask by leaving a comment below!