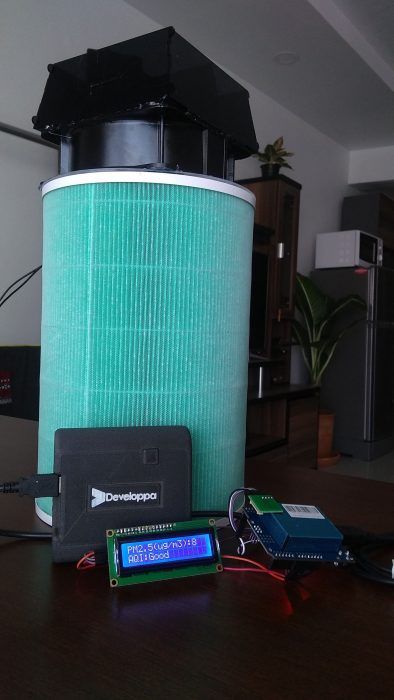 In this article, we will learn how to build your own air Arduino purifier and AQI sensor to stay safe and healthy when the Air Quality Index outside is less than acceptable.

For those of you that are not from tropical countries, near the equator there are normally only two seasons (although this varies from region to region).

In the north of Thailand, the dry season is particularly bad. Not because is hotter and it does not , but because there is an excessive amount of fires happening all around the region.

The result of forests burning everywhere plus the normal amount of pollution from vehicles and coal power plants is a thick layer of haze that is very unhealthy and even hazardous for any breathing creature.

The cause of these fires a mixture of and natural fires. From one side, as it is very dry, a leaf could ignite at some point causing a fire. However, the biggest culprit of fires in the region fires.

During this time of the year, farmers burn whatever was leftover from the previous crops (dry stems from corn plantations for example) on a massive scale. Apart from this, leaving rubbish around such as glass bottles and aluminium cans, can easily start a fire by reflecting the sun into a dry leaf.

This year (2019) has been particularly bad as pollution levels have reached an all time record high.

So far, the city of Chiang Mai has experienced AQI levels over 200 which is classified as very unhealthy for nearly a month, with some days even peaking to 500.

Fortunately, makers, engineers and inventors have come with cheap and readily available solutions to tackle the problem from a bottom up approach.

In this article, I have used knowledge and ideas from the Chiang Mai community. I do not claim to have invented the following devices, I am simply putting together what I have seen other makers have done in Chiang Mai to help people fight the air pollution indoors.

A particular thanks to Chiang Mai Makerclub is very well in order! Those guys are geniuses and have pioneered of devices. I am also using some of their recommendations and designs.

Very well, let’s get to building!

The purpose of the air purifier is to suck dirty air, filter it, and then expel it cleaner than before.

For this project, the cylindrical shaped filter from the Xiaomi air purifiers was selected.

There are quite a few options to select from Amazon, eBay or Lazada with varying prices.

We need a fan with similar diameter as the filter and enough power to be able to suck air in and pass it through the filter.

This part is not essential but will make the device work better. By directioning the air to the top and controlling the air dispersion, we help the device to filter other air mass instead of the same.

If you wish to manufacture this part, you can download the CAD file from here. (link pending)

You will also have to buy some acrylic and have access to a CNC machine.

Components: Plug header, AC wire, screw terminal (can be all bought at your local electrical shop).

Once you have made the AC wiring connection, plug your fan to check if it works and write down the airflow direction.

There you go! An Arduino air purifier (DIY) Ready to clean air!

The main function of the AQI sensor is to sense PM2.5 and display it on a screen.

The PMS7003 is a kind of digital and universal particle concentration sensor, which can be used to obtain the number of suspended particles in the air, i.e. the concentration of particles, and output them in the form of digital interface.

The Arduino is a microcontroller development board that acts as the “brain of the device”. It takes the information from the sensor, processes it and then sends it to the display.

The Arduino UNO rev3 can be purchased from many shops. Here is the Amazon and eBay link.

This small screen has just enough space to display the required information.

Here is the link for Amazon and eBay. You can get it from many more shops, make sure it comes with the I2C interface board attached to it.

Hooking up the electronics

Connect the PMS7003 to the Arduino

Using a female to male mod wire make the following connections (this can be bought in the shops mentioned before or you can find some laying around at Makerclub) :

Connect the display to the Arduino

Using a female to male mod wire make the following connections from the display adapter board to the Arduino (this can be bought in the shops mentioned before or you can find some laying around at Makerclub) :

Using the USB cable that came with the Arduino, connect it to either your computer, phone charger or (5V) such as the Mobile Solar Charger and Powerbank.

After connecting the Arduino to the power source you should see some LEDs light up in the Arduino, the screen on and the mini fan on the PMS7003 spinning.

Testing and Validation of the AQI combo

The quickest way to test the accuracy of the measurements of the AQI sensor is by comparing its results to a commercial model.

Ideally, this comparison would be done for at least the 5 different AQI level categories.

This first comparison has been made is against another DIY sensor from the Makerclub:

As you can see from the photo, both sensors display the same value.

The second comparison was against the average PM2.5 concentration level in Chiang Mai displayed by AirVisual. These network of sensors is assumed to be made of commercial models. My sensor was placed outside in the balcony.

Note: this post will be updated once I have access to a commercial AQI sensor and have tried it in different pollution levels.

The initial test consisted in running the Arduino air purifier for an hour a measuring how much the PM2.5 concentration changed.

The PM2.5 concentration dropped from 40 to 5 from running the purifier for one hour. This was done indoors in a 30m2 room and with an outdoors AQI of 89.